I felt the need to post to my dead blog today, because I hit a serious milestone.

That is too many.

Here's the card that rolled the dials up to 20k: 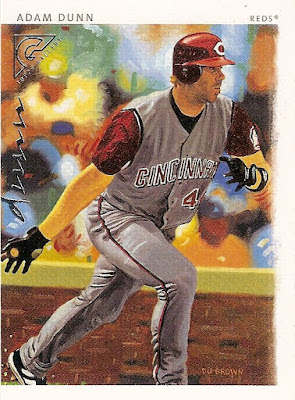 Here's a screenshot of the TCDB page: 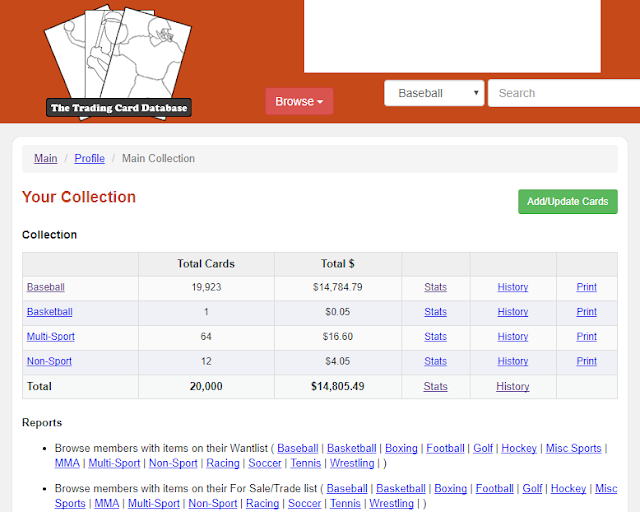 1) That dollar value is completely meaningless. Half the cards don't have a value listed, including many vintage cards. And the cards that do have a value are submitted by users, so who knows the criteria each person uses while entering values. But we ain't in this for the money, are we, kids?

2) The one basketball card upsets me. It's a promo card of Jack Armstrong from the 1991 Foot Locker Slam Fest, a charity basketball game that they sponsored. So yeah, technically a basketball card, but of a baseball player doing a charity gig. And honestly, it's worth way more than 5 cents. Like 20 cents. Geez.

3) Some Goodwin Champions sets are listed as multi-sport, some aren't. Bothersome.

4) The 12 Non-Sport cards are from the Pacific Eight Men Out set. It features cards with photos from the movie, photos from the original 1919 White (Black) Sox, and photos from the team that beat them in that World Series, which is often overlooked: my Reds. Their first WS title, in fact.

10) A paltry 31 are of my favorite player, Corky Miller

11) I technically hit 20,000 a bit ago, as there are a few dozen cards in my collection that don't have entries in the TCDB. But we can overlook that for now.